[Game] What is the title of these movies? 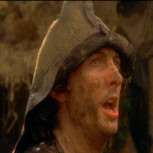 I would rather say "unfair" since there is no rules that explecitly forbid it (it would be impossible to enforce anyway). But that's just something i thought was worth mentioning, don't put to mu